The company’s flagship is the focus of eight key projects that will completely transform it, in what will be the most ambitious venture in its history

The Valladolid company will invest more than 10 million Euros in the project, which will be completed next spring

Valladolid, 21st of January 2020 ‘Essence of Matarromera’ is the name of the project that is completely transforming Bodega Matarromera, allowing the winery to adapt to the future in a sustainable way. The project will be completed next spring. This plan, divided into eight key areas, involves an investment of more than ten million Euros. This is the most ambitious commitment in the company’s history and is the result of the constant search for excellence by its president, Carlos Moro.

For the businessman and winemaker, “wineries have to be flexible, dynamic and modern companies, but without losing the essence we have been treasuring throughout our history”. In this sense, and after decades of existence in which Bodega Matarromera has consolidated its national and international prestige with many awards, two years ago Carlos Moro decided to start this ambitious challenge of expanding and renovating his most emblematic winery. 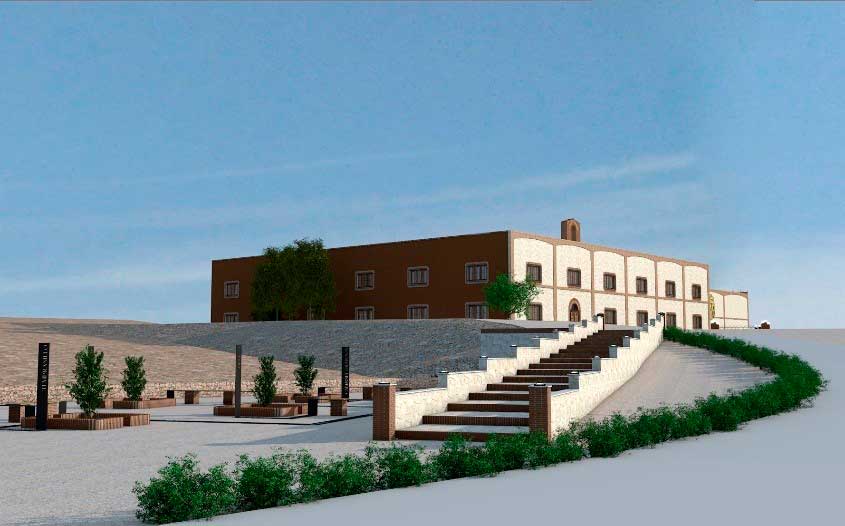 At first glance, a highlight of the project is the creation of a complex in the most traditional château style, where the winery will be surrounded by twenty hectares of vineyards. A new hall has been built on the west-facing side of the main building, using the same materials to add a symmetrical element to the construction, without making any changes to the main façade. In total, the plot will have a constructed area of nearly 11,000 square meters. The existing winery building is being completely updated with new floors, ceilings, electrical installations and a modern LED lighting system. All the tanks have been replaced by newer, more modern models, and wooden vats have been incorporated for the special production of the estate and Gran Reserva wines that characterise the brand. In addition, the winery will have a new bottling system that will improve performance and productivity.

One of the fundamental objectives of this project is to guarantee road safety. So, an acceleration and deceleration lane has been created from the road to provide access to the new complex. In addition, a separate lane for logistical access vehicles has been created to facilitate the flow of goods.

Bodega Matarromera’s energy management, to reduce costs and improve energy performance, is the result of its commitment to sustainability and forms another key part of this project. Furthermore, it has been a priority to introduce the winery to the 4.0 industry by means of an integrated management system. This allows massive data analysis in order to optimise production processes and to improve production efficiency and the direct relationship between the machine, the process, the operator and the manager.

Thanks to the extension of the photovoltaic systems on the roof and in the new car park, it is estimated that the energy needs of the winery will be comfortably covered during the day.

The ‘Essence of Matarromera’ project also includes the addition of state-of-the-art equipment throughout the winemaking process, such as mechanical devatting. The project will also develop service technologies in terms of lighting, air conditioning and visual projections.

Design and interior decoration is another key element of the project, the aim of which is to maintain and transmit the true identity of Matarromera, using materials such as stone, brick, oak and concrete. Both innovation and differentiation come ready-made through the creation of new outdoor and indoor spaces such as ‘The Balcony Square’, ‘The Varieties Garden’ or the ‘The Hall of the Distinguished’ which have been designed to promote the world of wine from a leisurely point of view.

Bodega Matarromera is the first of ten wineries that Carlos Moro created and that make up Bodegas Familiares Matarromera, a winemaking group dedicated mainly to wine growing, producing high-end wines in six of the most accredited Denominations of Origin in the country (Ribera del Duero, Rioja, Rueda, Cigales, Toro and Ribeiro). During its three decades of existence, Bodega Matarromera has consolidated its national and international prestige with many awards, as well as by taking part in events that have marked the history of our country, such as a connection with Their Majesties the King and Queen of Spain and the Latin American Summits. Currently, Bodega Matarromera is active in more than 80 countries.